Pianist Starla Raley holds D.M.A. and M.M. degrees in piano performance from the University of North Texas, where she was a pupil of Joseph Banowetz, and a B.M. degree from Illinois Wesleyan University. She also studied at the Vienna Conservatory of Music in Vienna, Austria. The Illinois native was awarded Professor Emeritus status in honor of her 22-year career of teaching at East Central University in Ada, Oklahoma, from 1991-2013. Starla has been the recipient of several awards, including first prize in the Ernst Krenek Competition of the Joanna Hodges International Piano Competition. She actively champions new music written for piano and, in 2012, gave the world premiere performance of a set of six piano pieces, entitled Hermititos, written by Texas composer Ken Metz. Raley married in 2013 and relocated to Madison, Indiana, where she continues to combine a lifelong career of performance and teaching piano. A frequent guest on concert series venues sponsored by universities and city arts councils, she has most recently performed on stages in New Mexico, Oregon, Oklahoma, Texas, Arkansas, Illinois, Michigan, California, North Carolina and Arizona. As a collaborative artist, she has accompanied such internationally renowned artists as cellist Tess Remy-Schumacher, New York-based singers Shawn Thuris (tenor) and Monica Hershenson Thuris (mezzo-soprano), and award-winning flutist Julianna Overmier. Starla continues to teach and perform each summer as the artist-in-residence at Inspiration Point Fine Arts Colony’s Piano/Strings Camp near Eureka Springs, Arkansas. Currently, Starla teaches at Ivy Tech Community College, serves as organist of Madison’s Christ Episcopal Church, and owns and operates the Mulberry Music Studio in downtown Madison.

Dr. Kevin Costley holds several graduate degrees in the areas of curriculum, instruction, and piano pedagogy/literature, including a Ph.D. from Kansas State University. At the age of 27, he was distinguished as one of K-States youngest doctors. For nearly two decades, he was owner/director of the Keyboard Academy, specializing in private and small group teaching.

Since 1995, Dr. Costley has been a standing faculty member at Inspiration Point Fine Arts Colony Piano and String Camp, where he specializes in large ensemble classes and teaching composition. His published compositions have been continually listed in the National Federation of Music Clubs bulletins, the Royal Conservatory list, and other performance repertoire lists. He was awarded the Certificate of Merit in California for his Composer in Focus collections published by The FJH Music Company, Inc. In 2008, Dr. Costley was awarded the prestigious Arkansas Traveler’s Award by the governor and commissioner of the state of Arkansas in recognition of his distinguished accomplishments in the field of piano composition. Frequently Dr. Costley adjudicates piano festivals, auditions, and composition contests and has been a speaker/clinician at state, regional, national and international conferences.

In 2011, Dr. Costley celebrated his silver anniversary with his wife, Dana. He is the father of two musical children, Benjamin (a percussionist) and Victoria (a pianist). After retiring from university teaching in 2015, he now resides back in his home state of Missouri. He and his wife became proud, first-time grandparents in 2016.

For more information including videos and published music, visit www.kevincostley.com. 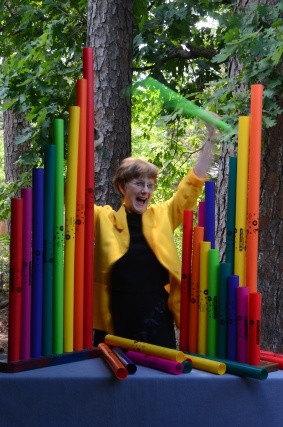 Ellen Foncannon Stephenson is a pianist, organist, music educator, composer, piano teacher and accompanist.    She works with the Arkansas Artists in Education and is an active writer of numerous choral, keyboard and Boomwhackers publications.

Studies at Fort Hays State University and the University of Kansas prepared her for a life-long career in the music education and business sectors.    While teaching music and writing for piano and classroom events in her hometown of Greensburg, Kansas, she discovered Boomwhackers Musical Tubes and consequently formed her own company ‘Boom-a-Tunes’ to provide related educational materials.

In 2003 she joined Whacky Music in Sedona, Arizona, and worked closely with Craig Ramsell, the inventor of Boomwhackers.    As the company representative, she was educational consultant at major trade shows including the National Association of Music Merchants and the New York City International Toy Fair.

Following the successful recording projects of  Winterwood:    Finding Your Way Home and Light Deferred piano music, her commisioned work by Thorncrown Chapel entitled Thorncrown: Sacred Space was released this past fall. Ellen has been accompanying and playing the piano and organ since she was ten and cannot imagine life without the gift of music.

Marcy J Prescott began studying piano at the age of eight in Frederick, Oklahoma, with Mrs. J.C. Plot. She consistently participated in piano solo, piano duet and theory competitions through high school sponsored by NFMC and Guild. She also participated in regional and state sonatina/sonata festivals.  She graduated from Cameron University in Lawton, Oklahoma, in 1985, with a Bachelor’s Degree in Piano Accompanying. While there she studied principally with Dr. Virginia Sircy, but while preparing for her senior recital she also studied with William Fletcher for his expertise on Mozart and Dr. Thomas McCollom with whom she studied Hindemith.  In 2003, she received a Master’s Degree in Music from Southwestern Oklahoma State University in Weatherford, Oklahoma.

Ms. Prescott began accompanying for choirs at her church when she was ten years old and soon after, started accompanying for church services. At the age of thirteen, she accompanied for her first high school musical. A partial list of the musicals she has accompanied for during her career include: Oklahoma, Li’l Abner, Annie Get Your Gun, Cinderella, Grease, Baby, A Funny Thing Happened on the Way to the Forum, Seven Brides for Seven Brothers, and Spamalot. She directed productions of the Wizard of Oz Young Performers’ Edition, Annie Jr., and Little Shop of Horrors.

In 2006, following a career in secondary music education, Prescott opened Make a Joyful Sound Studio in Frederick, Oklahoma, where she teaches piano and voice. She consistently has students win at district and state competitions and perform in honors recitals. She is an active member of the Singing ChurchWomen of Oklahoma and maintains membership in the Oklahoma Federation of Music Clubs, the National Federation of Music Clubs and the Lawton Schubert Music Club. She also judges regularly in piano and voice competitions in Oklahoma and Texas.